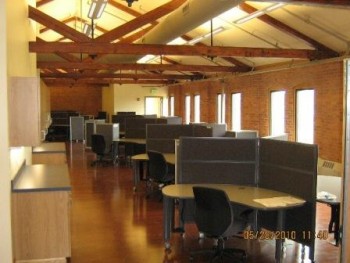 ECR International, (formerly known as Utica Boilers Co.), is a long time major manufacturer of residential and commercial boilers and air conditioning equipment. ECR announced consolidation plans in early 2008. The consolidation included closure of facilities in Rome, NY and Ontario, Canada, and required planning for major expansion and upgrades at the home plant, located on Dwyer Ave in Utica.

For the Office Renovations, Alesia and Crewell Architects of Utica was hired in late 2008 to prepare plans to accommodate the consolidation. The plans included renovation of 3 floors and a Stair Tower addition to accommodate the consolidations but also to upgrade the existing Offices. The project was bid, and we were the successful bidder. The project was over budget, so we worked with the owner over the next several months to bring it within budget and was eventually scaled back to include just the Third Floor Engineering Offices as well as preparation for the future balance of the project.

The project includes restoration of the historic brick and wood work in the engineering “War Room”, (20) new Offices and Conference Rooms, Toilet Rooms, and Kitchen as well as a new elevator, stairs, HVAC, and Electrical. A new Electrical Service for the entire facility was also provided in this phase. Also included under our contract were the new security and fire alarm system, voice and data equipment, as well as all of the office new furniture.