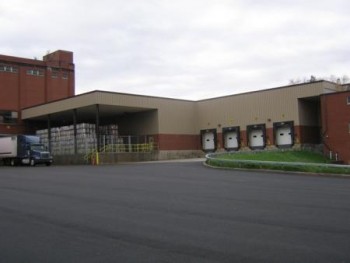 Following the devastating fire in May of 2008, at Utica’s historic FX Matt Brewery, we offered our assistance in the emergency clean-up and worked with the owner’s insurance adjuster to settle the extensive loss claim. The owner gave us the go ahead and our field crews began the extensive clean-up and demolition, and our office staff began the detailed estimate and coordination of the emergency work.

Meanwhile, the owner employed MARCH Associates of Utica, to begin plans for the re-construction of the Second Floor Canning area and a new 25,000 sf Warehouse. We prepared a proposal to serve as the General Contractor and Construction Manager. The proposal included a cost plus fee arrangement, including preparation of budgets for both phases and bidding out all areas of the work to qualified pre-selected subcontractors and suppliers, and working on a Time and Material basis against the budgets for our self- performed work. The owner accepted our proposal and work began immediately.

The re-construction of the second floor Canning Area began in January of 2009 and was completed in June.

The new 25,000 sf Warehouse was started in January of 2009 and was completed in September. The new building connects the main plant and an existing Garage, and features geo-thermal wells for heating and cooling of the Warehouse and a new Keg Cooler, a Butler Manufacturing structural insulated wall panel system known as Kore-Tech, Butler metal siding inside and out, (5) new loading docks and a 4,000 sf covered Keg Platform. The project also included extensive site re-construction and new pavement.

We are currently completing additional projects including a new 5,000 sf Keg Cooler, Renovation of the Rail Tunnel, and re-construction of a Re-cycling area building.

We are proud to have participated in the re-building and improvements of this Utica institution and landmark facility.