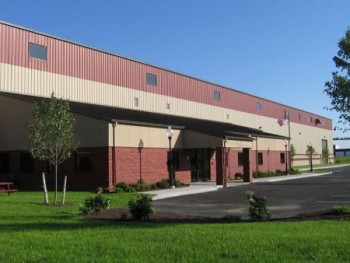 In May of 2008 we received our first inquiry on a proposed 58,000 sf steel plate distribution facility on a former industrial site in East Rome. The owner from Houston, Texas, had never built a building in our area and was looking to partner with an experienced design-build firm, to work with their Houston consultant, Builders Technical Services.

The owner, American Alloy Steel, had occupied a much smaller leased facility nearby for the past (20) years, but had outgrown that building. The site, which was owned by the city of Rome, offered an ideal location with rail access, a critical requirement for this operation. However the site also had several obstacles, mainly former foundations from the original buildings and very unstable soils due to its proximity to the Erie Canal. Fortunately, the City of Rome, through a brown field re-development program, had substantial monies available for re-development to fund a foundation demolition and rubblization project.

As the demolition project proceeded, we finalized our proposal to furnish and erect a custom Butler building with capacity for (4) 20-ton bridge cranes. We then worked with a Texas engineering firm, CBM Associates, and BTS to design an extensive wood and steel pile system consisting of over (700) steel and wood piles, foundations and structural slab. Plumley Engineering of Rome was employed by the owner for design of the 11-acre site. Eventually the designs were completed and we were able to firm price the steel and wood piles, foundations and structural slab work, and continued on a Design-Build basis to develop design, scopes and pricing for Mechanical, Electrical, and build out of the 5,000 sf Office and Plant support areas as well as the extensive Site Development and improvements.

The pile work was started in November of 2008, and a contract was finalized in January of 2009. The foundation work continued through the winter and the building was erected February and March, slabs were installed in April, site development including the rail spur was completed in May and June, and the owner occupied the Distribution portion on schedule on June 8, and the Office portion on schedule July 13, 2009.