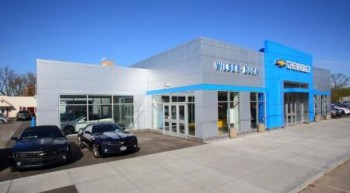 In the spring of 2011, we sent out letters to local Chevrolet Dealerships asking if they were going to complete the renovations that were a new Image requirement from General Motors. The Wilber Duck dealership in Oneida responded and asked if we could meet with them. Following that meeting we prepared a budget based on the preliminary information from GM. We then offered our Design-Build Pre-Construction services to develop the drawings enough to prepare a more accurate budget.

In the fall of 2011, the owners accepted the budget. Through the winter, we completed the Architectural, Structural, Mechanical, and Electrical plans with our consulting Architect and Engineers. The plans were submitted and approved by GM. We then bid out the project to a qualified list of area sub-contractors and suppliers and finalized costs for the items we self-perform.

The project began in March and was completed in early November 2012. The renovations included a complete removal of the Showroom building exterior, structural modifications for the new storefront layout and new GM Standard Aluminum Panels and signage. Also included were 2 additions – one for New Car Delivery and a Service Entrance Canopy. A complete interior demolition and renovation of the Showroom, Sales, Business, and Executive Offices, Customer Waiting, Service Write Up and Parts Sale areas was completed. Also a new electrical service and completely new HVAC systems were installed.

We are glad to have led the design and construction renovating this 80 year old building giving it a brand new look that meets the new GM/Chevrolet standards. We will add this project to our growing list of completed Auto Dealership projects.